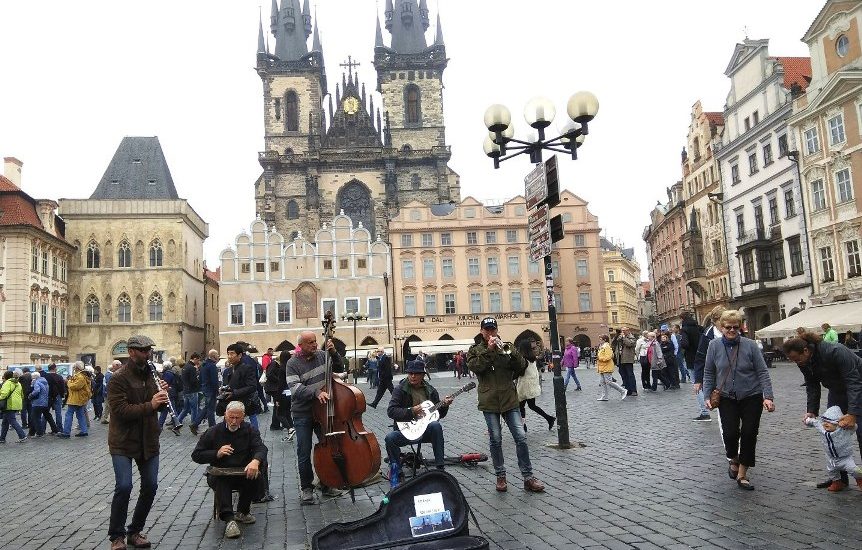 An ode to street musicians.

Whenever I travel within the UK and European countries, a general sight that cannot be missed is the local street musicians performing on the streets.  I am sure the same prevails in other countries of the world.

The music fills the air and one can hear it from afar.  I keep a lookout for such StreetMusician on my travels.

I have often stopped and just sat down for 30-45 minutes to just listen to their music. It feels like the whole world is in front of me in that moment – can see people passing, children laughing, people shopping, traders selling their wares, some people just sitting and watching like me, elderly couples holding hands and taking a leisurely stroll down the street, all these things happening, whilst in the background the street musicians weave their magic, which adds a whole new dimension to the scenario.

The street musicians or performers always bring a smile to my face, their music that wafts through the air, fills my heart with happiness. It’s a blissful feeling and it feels as if time has come to a standstill.  I think it is very important to stop and listen to their music, watch their performance and always appreciate them by applauding and also by placing some money into their hat or open guitar case or buying their CD.

Quite often I think it might be quite discouraging for the street musicians/performers, if people do not pay attention or stop to appreciate their music.  These are the people with real talent, who may be performing in the hope of landing a gig, or who may be doing this as their part-time job or may be just doing it as it makes them happy to bring other people happiness through their music. Whatever be the reason for them performing on the streets, I think it is only right that we stop and applaud and appreciate their music and give them some money in return for their sweet performance. After all they are performing and displaying their talent and not there begging. I have a lot of respect for street musicians. Street performance or busking as they call it, is the act of performing in public places for voluntary donations.

We don’t mind spending a couple of Hundred Dollars for a music concert, then why do we have to act so stingy when it comes to shelling out a couple of Dollars for the street musicians? The musicians performing on the streets are really talented, and  many times sell their creations in the form of CDs.

So the next time you pass a  street musician playing the guitar or the flute or any instrument, or singing, please stop, listen to their music and acknowledge their presence. It’s the least we can do for the hours that they spend in practicing and putting up such a wonderful show, irrespective of whether people stop by or not.

As an ode to all the street musicians / performers all over the world, here’s a  short befitting tribute from the song by the Swedish pop group ABBA: Thank you for the music.

Thank you for the music my dear street musicians.

Until I come back again with another travel story,  keep traveling and keep sharing your travel stories here.